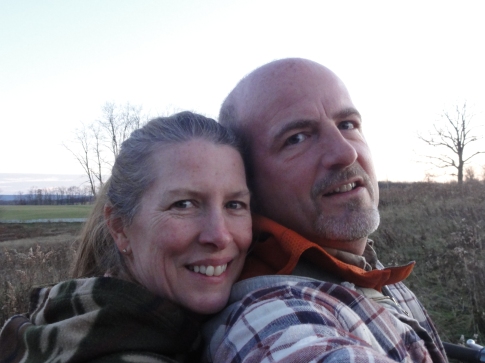 We bought this property back in 1994 when we were living in Boise, Idaho.  Having both grown up in Pennsylvania, we still had a lot of family on the East Coast and we were looking for a small plot of land where we could build a cabin and spend some vacation time with friends and family.   Well, the plot we ended up buying was anything but small – at 400 acres, it was the last remaining parcel from the original 2500 acre Buffalo Coal Company estate.   The owner was anxious to get rid of it, but having some difficulty because this particular plot held the old farm dump – an ugly scar on the landscape, filled with twisted metal, concrete, tires, stumps, building materials, and other miscellaneous garbage.   It was a case of being in the right place at the right time and we picked it up for a great price, even considering how cheap most property was before the Deep Creek Lake/Wisp expansions sent prices soaring all across Garrett County.

The planned cabin never materialized, but when we moved to Washington, DC in 1999, we started to spend more weekends in Garrett County.   We tent camped for a while, but soon got tired of unpredictable weather and hauling all of our stuff back and forth from the city, so started looking for a location to build some sort of more permanent shelter.  While the property was crisscrossed with old logging roads,  the only one that had any kind of a solid base to drive on was the road to the old dump.   So, we decided to set up shop there and built the original Glamping Hut!   It overlooked the dump, but we kitted it out with a bed, window, cabinets, a wood burning stove, and a stone patio.  It was perfect!  We used that hut almost every weekend for the next year and a half.   It’s still standing today, albeit a bit overgrown and rough.  We don’t have the heart to tear it down.

We all have a story about what happened in the fall of 2001, but that’s not what this little write-up is about, so I’ll just say that it threw our lives into a bit of turmoil.  We moved out of Washington, DC back to my hometown in Pennsylvania and started putting together a plan to finally build that “cabin” on the property in Garrett County.   It was an interesting year while we were building – we moved 6 more times, lost/started 3 jobs between us, got stiffed out of a sizeable chunk of money by Russian “business” men, traveled extensively to the south of France for work, and lost a beloved pet.

But what we ended up with was the Wild Yough Villa, tucked into the back of the 400 acre property with a mile long driveway.  It was a perfect place to regroup and hide from the world for a while.   And that’s exactly what we did for the next two years.   It was fantastic!  The stories we could tell 🙂  But, again, that’s not what we’re here to talk about today.   Somehow we’ve got to get back to Wild Yough Glamping huts, right?

Well, as I mentioned, during this period I was working for a French company with offices in Washington, DC.  However, my project team was based back at the company headquarters, so I ended up spending a lot of time in Southern France.   Oh-la-la!  Montpellier is a beautiful old university city built on Roman foundations and strategically located between the vineyard covered hills of Languedoc and the azure beaches of the Mediterranean.  Well, of course Beth came along on a few of those trips and we both fell in love with the idea of a foreign assignment to live in Europe for a few years.

Unfortunately, my company decided to move their headquarters to Washington (ugh), so we had to find another way to get a short-term foreign assignment.  Beth pulled it through for us (as she always does), and landed a 2-year assignment, complete with moving package.  The problem was that her company wasn’t interested in setting up a European footprint on the sunny coast of the Mediterranean, but rather in the soggy, industrial swamp lands of Holland.  We had never been there.  It had never been on our “must-see” list, and we knew nothing about The Netherlands.  But, we said “yes” anyway, sight unseen.

Sixteen years later and we are still here.   There is a long, long story in there somewhere, but we usually reserve that one for a leisurely evening over a bottle of wine (or two).   Suffice it to say, that we love it here.  It is home.

But, back to Glamping.  Glamping wasn’t really a thing ten years ago.  We always enjoyed camping, but never did much over here in Europe.   So when we stumbled across our first Glamping experience while on safari in Botswana (Okavango Delta for those of you who have already seen the stories behind how we named the huts), we were both very impressed.  No setting up a tent.  No sleeping on the ground.  Yet still rustic and in the middle of nature….we loved it!   So we started seeking out Glamping vacations across Europe, staying in a converted bus, wheeled shepherd huts, tree houses, yurts, geodesic domes, and even an old rail car.  But it was back in The Netherlands where we got the real inspiration for Wild Yough Glamping Huts.   The Dutch don’t have a lot of space – it’s a tiny country with a gazillion people in it.  Their cities are therefore compact, with virtually no urban sprawl.  This means that most people live in high-rise flats or row homes.   And while the row-homes have yards, the flats do not.  The Dutch love their outside space, so they have introduced the concept of volkstuinen, or “peoples gardens.”  These are large plots of land, which are subdivided into smaller plots which can then be leased to individuals so that they can grow vegetables.   Around Amsterdam, most of these volkstuinen are no longer being used for vegetable gardens, but have been converted into lush, green little holiday plots, where the lease holders build beautiful little huts to relax in when they bike out of the city.  I see such a volkstuinen every day from the window of my train into Amsterdam, and one day it just hit me…Glamping Huts!

And so it began…